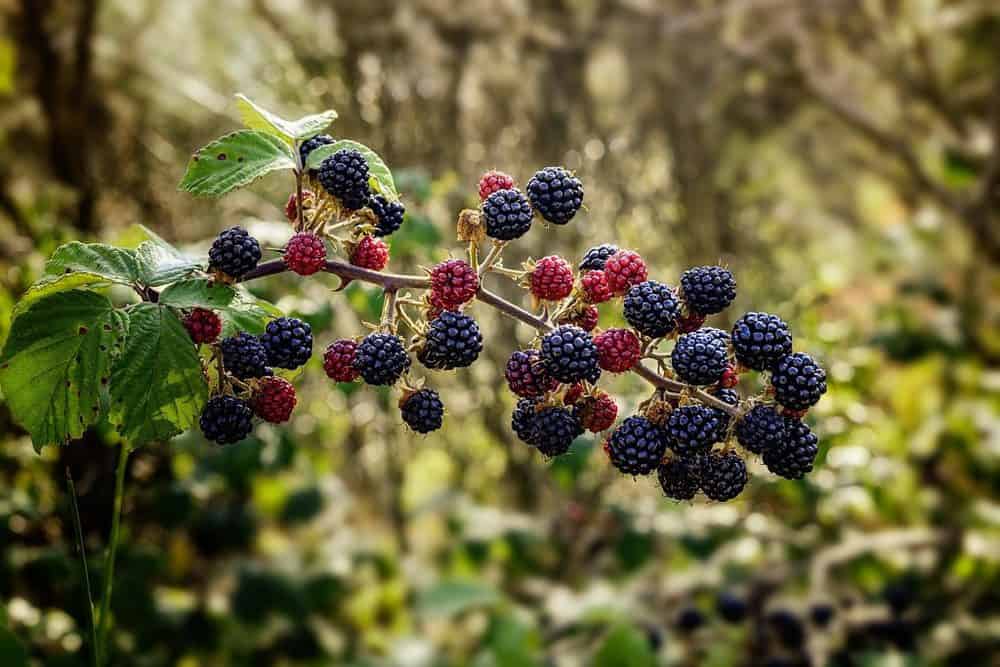 This garden shredder tip concerns how you can use your shredder to reduce the menace of brambles in your garden.

It’s autumn again. We have been doing some much needed tidying up around the garden and have encountered more brambles than we would like. Here’s how we use our quiet shredder to help get rid of the brambles.

We have talked of our expanse of hedges before. We have 40m of 3m high mixed Laurel and Elm hedging on our roadside boundary. There is a couple of Lilac bushes and an a Holly bush embedded in the hedge.

The major problem with looking after this hedge is its depth. At places it is well over 2m thick. This provides great privacy with super sound insulation from the road. It does make it a challenge to cut. It also provides an incredibly good environment for brambles to grow.

Brambles don’t need a lot of light to grow. They get seeded from bird’s droppings which, quite naturally, fall right in the middle of the hedge. Brambles grow incredibly quickly and can easily put on a couple of feet in a few days as they reach for the top of the enclosing bushes and shrubs. Once they reach the top the brambles will spread out and put out lots of leaves to make best use of the sunshine.

Some of these brambles can be 20 feet or more long.

I don’t like using any of the chemical bramble killers – they all seem a bit toxic for my liking.  Most of my shreddings are composted too. Using weed killers on things to be composted in not a good idea. In any case, part of the reason for the depth of the hedges is to provide a habitat for birds, insects and hedgehogs.

It’s got to be said, there are times when we get some decent blackberries from our brambles. I am not sure I would like to eat these (apple and blackberry crumble is on of my favourites) if I had been using bramble killer in the garden.

Instead I try to cut the brambles as low to the ground as possible. If I can force my way in (2m thick hedge can resist my attempts to get to the middle pretty well) I will try to dig out the roots. Failing that I try to reach in and use the hoe to destroy as much root as possible. The vain hope is that some natural disease will be able to enter through the ragged cuts in the roots and kill the bramble that way.

Disposing of the Bramble

That still leaves me with a great long bramble to dispose of.  No matter how you try to handle them, brambles seem well able to wrap round your hands and limbs leaving lots of small and not so small grazes and scratches.  Disposing of brambles always used to be a bit of a problem too.

What we have found is that, if you get the root end of the cutting fed into a quiet shredder, the self feed mechanism will pull the whole bramble through quite easily.  Don’t stand too close to the bramble once you have started the feed – it is still going to do its best to reach out and snag you.

The shredder will chop the bramble up into 1-2cm, crushed chips. The cutting and crushing gets rid of most of the thorns and barbs so you can handle these shreddings pretty safely (while wearing gardening gloves of course).  Once chopped up we just throw the bramble onto the compost heap (admittedly right at the back where we don’t usually take any compost from).

We’ve had no cases of regrowth from the cuttings in the compost.  Sadly, unless you can really get in and remove the roots, the brambles do grow back in the hedge.

We use cookies on our website to give you the most relevant experience by remembering your preferences and repeat visits. By clicking “Accept”, you consent to the use of ALL the cookies.
Cookie settingsACCEPT
Manage consent

This website uses cookies to improve your experience while you navigate through the website. Out of these, the cookies that are categorized as necessary are stored on your browser as they are essential for the working of basic functionalities of the website. We also use third-party cookies that help us analyze and understand how you use this website. These cookies will be stored in your browser only with your consent. You also have the option to opt-out of these cookies. But opting out of some of these cookies may affect your browsing experience.
Necessary Always Enabled
Necessary cookies are absolutely essential for the website to function properly. These cookies ensure basic functionalities and security features of the website, anonymously.
Functional
Functional cookies help to perform certain functionalities like sharing the content of the website on social media platforms, collect feedbacks, and other third-party features.
Performance
Performance cookies are used to understand and analyze the key performance indexes of the website which helps in delivering a better user experience for the visitors.
Analytics
Analytical cookies are used to understand how visitors interact with the website. These cookies help provide information on metrics the number of visitors, bounce rate, traffic source, etc.
Advertisement
Advertisement cookies are used to provide visitors with relevant ads and marketing campaigns. These cookies track visitors across websites and collect information to provide customized ads.
Others
Other uncategorized cookies are those that are being analyzed and have not been classified into a category as yet.
SAVE & ACCEPT